Start a Wiki
Black Vulcan (Michael Jones) has made several appearances on the show. Along with Apache Chief, he is the co-founder of The Multi-Culture Pals.

He debuted in the season one episode "Very Personal Injury," where he describes his power as "Pure electricity… in my pants," to which someone responds "Oh, my." This becomes a running gag: whenever someone makes a double entendre, he will often appear to utter some variation on "…in my pants." In a later episode, he gives advice to Peanut as he goes through superhero puberty and acquires his powers. "I felt something... happening..." "In your pants?" "That's right. In my pants."

In the episode "Booty Noir," he has a menage a trois with his ex-girlfriend Norlisa and Reducto.

Apparently he used to go by the name of Supervolt before Aquaman suggested his present name, to which Black Vulcan responds that maybe they should just call Aquaman "White Fish."

According to "Sebben and Sebben Employee Orientation," Debbie has a crush on him, which makes him feel very uncomfortable (in his pants.) This is apparently meant to be sexual harassment.

In Harvey Birdman, Attorney General, Black Vulcan was America's last President, and the rest of the cast aim to re-elect him. He also wears a really cool jacket now.

Black Vulcan, like Apache Chief, was originally created by Hanna-Barbera to create a more racially diverse cast of superheroes for Super Friends, although they are largely considered out of place racial stereotypes and jokes among heroes by today's public. This is often parodied by Harvey Birdman, with Apache Chief and Black Vulcan both having been fired by the Super Friends; Black Vulcan's case being because of some sort of budget thing, though he thinks it's because they were always pairing him up with a white member, "like I was gonna start super-lootin' the minute they weren't watchin'." This is not true, as in the first episode of Challenge of the Super Friends, Black Vulcan does in fact super-loot, but in a different context (his unconscious mind was being manipulated by Lex Luthor's dream machine.) 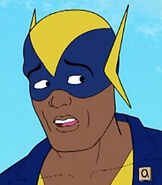 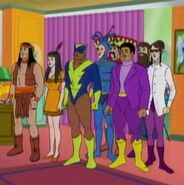 Add a photo to this gallery

Retrieved from "https://harveybirdman.fandom.com/wiki/Black_Vulcan?oldid=4328"
Community content is available under CC-BY-SA unless otherwise noted.